UPSCALE MAC Meeting in Rwanda, May 2021 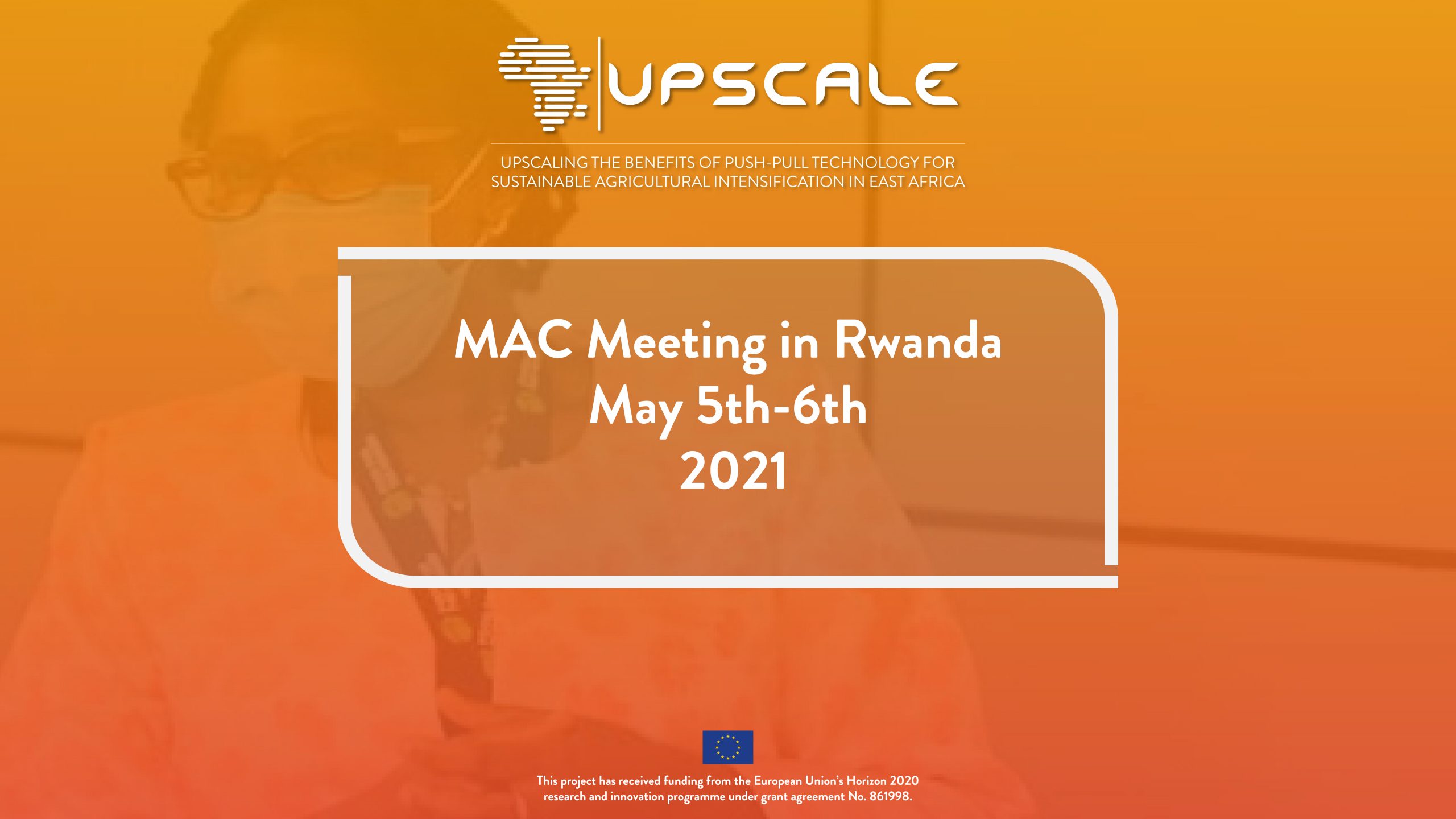 Yet another UPSCALE Multi-Stakeholder Community (MAC) meeting is closed! This time, UPSCALE partners Food for the Hungry (FH) – Association Rwanda and Rwanda Agriculture and Animal Resources Development Board (RAB) bring impressions from the field. The event took place in Kigali, Rwanda, on the 5th and 6th of May 2021 gathering a group of not only farmers but representatives of the scientific community, civil society, policy makers, banking and insurance experts as well as local leaders whose impact is greatly appreciated in spreading the word about UPSCALE and engaging more farmers in the implementation of the push-pull technology. This included the executive Secretary of Nyagihanga Sector (Gatsibo District), Mr. Erneste the Director of Agriculture and animal resources in (Gatsibo District) Mr. Octave Nshimiyimana from the Ministry of Agriculture and Animal Resources, and Mr. Olivier from the Consumer rights protection organization (ADECOR), among others.

Just like the other first national MAC meetings, the one in Rwanda shared the same main goal – the formation of the MAC management team, establishing the MAC terms of reference and a schedule of activities as well as to make the field visit of push-pull plots to assess the contribution of this technology to the production. As a clear indicator of the success that push-pull has and the potential it carries for the farmers considering joining, UPSCALE presents testimonials of those farmers already implementing the push-pull technology.

“When the fall army worm invaded It was not easy at all for us to produce our maize. Now after introducing Push-Pull technology in our plots, there is a gradual improvement. Before PPT we used to harvest not more than 300 kg on a plot of 50 acres due to a considerable loss in the field caused by fall armyworm, now with the introduction of PPT we can harvest 900-1000 kg on the same plot. Another advantage is the reduction of striga weed known as KURISUKA due to the use of brachiaria, and this increases the fertility of the soil. PPT has also enabled us to have a reliable supply of feed for our livestock all year round as brachiaria and desmodium always produce even in the dry season. I don’t have a big land, but because of having desmodium, I never run short of pasture, and a cow which feeds on it enjoys it very much, even if you give it to a goat, it will eat everything. My wish would be to expand this method to other communities to enable other people to benefit from it.“

“Push-pull uses two grasses: one planted between rows of maize (desmodium) and another planted on the contours of the field (brachiaria). Before when I hadn’t started using this method of Push and Pull, I used to get a meager harvest, as well as having a lot of armyworms. I seemed to be cultivating in vain, but now when I started applying the PPT method the harvest increased tremendously. FH team did a great job and we are thankful, because it’s the one that first gave us these grass species, and we started distributing them amongst ourselves. The effectiveness of Desmodium now can be evaluated at 75% because we have been using various types of it – one species could be more effective while another could not. We are now able to determine which one is more suitable to our land, however, regardless of the species, PPT has proved to increase the harvest compared to the plots without PPT. When you introduce the PPT for the first time, the harvest does not automatically increase considerably because the Desmodium does not produce enough smell when small to repel the predators, however when the desmodium and the brachiaria become fully grown the effect they produce becomes more apparent and the harvest increases.“

“I have an agricultural land of 3.2 hectares and I started using the PPT in 2018 when FH mobilized us about how to fight armyworm using this technology. The PPT is traditional arable farming, we use desmodium and brachiaria grass species. It implies that we first plant the desmodium seeds/Push, thereafter planting maize in lines, whereby we also plant maize in between which are also planted in linear patterns, and finally planting bracharia on the boundary of the garden/Push. When butterflies that produce armyworm come, they find desmodium that repels them with its smell and drives off to brachiaria because of its scent. In such case, they lay eggs that do not succeed to develop on brachiaria enabling us to get a good harvest of maize, without using the usual chemicals. Apparently, the yield has increased, and we are now free from the burden of spending the whole day collecting armyworm. In addition, Desmodium increases mineral salts in the soil.“

Nkima Germain (Researcher from RAB) has explained the process behind the technology, why Desmodium and Brachiaria are more efficient and how the chemicals which are used to kill army worm or other pests within the crops kill also other insects – which are called inshuti z’abahinzi (literally meaning “The friends of farmers”). They are useful in increasing the harvest for example bees.

He adds: “Apparently research is underway in regard to find traditional methods which will be used in fighting crop pests, at the same time protecting environment, Push and Pull being among them. Push-pull as uses two grasses, as already indicated, to push away the insect and to pull the insect from the maize field. The livestock we used to be fed with the Napier grass, but the current species of Napier grass commonly used in Rwanda has been gradually deteriorated over the past few decades due to various diseases and does not produce to the optimum. Brachiaria used in the PPT is in the same group and contrary to the current species available in Rwanda, this grass provides enough production for the livestock. In addition, this species is resistant to drought which is often the main challenge in this area. Food for the Hungry in collaboration with RAB and other partners are conducting research to have enough evidence which will form the basis to expand this technology in the whole country”.

Gloria Mutoni, from FH, has clearly outlined both the benefits and current challenges that for further uptake of the PPT.

“PPT is traditional, with an ability to fight pests (army worm), without negatively impacting environment. The testimonies we have been getting from farmers indicate that the grasses used are good for livestock because they have proved to increase the milk of cows fed on it. The main challenge now is to increase the adoption of this technology to as many farmers as possible and to make other stakeholders support its adoption in different ways. As with any new technology, it is not easy to convince people without enough evidence, so in UPSCALE we are trying to produce as many as possible through research with our 18 partners across the world which will form the basis for adoption and expansion. Another challenge we are having is to produce enough seeds or seedling of brachiaria and desmodium, which haven’t yet become sufficiently available, in order to enable the farmers to have enough supply of them.”

What are the next steps?

During the next 5 years, it is the aim of UPSCALE, FH, and RAB team to have enough information and evidence which help make effective advocacy interventions to decision-makers in Rwanda, as well as towards other involved actors – to support the adoption and expansion of the push-pull technologies. This event was the first step in forming a management team for the multi-actor communities for practices that will support the project to plan and implement advocacy events. Therefore, the newly formed MAC management team will meet again in June 2021 to set a programme of future activities to facilitate the effective implementation of the project, including a baseline survey in the selected location to produce benchmark data on which the project will be evaluated.

We use cookies on our website to give you the most relevant experience by remembering your preferences and repeat visits. By clicking “Accept”, you consent to the use of ALL the cookies.
Cookie settingsACCEPTREJECT
Manage consent

This website uses cookies to improve your experience while you navigate through the website. Out of these, the cookies that are categorized as necessary are stored on your browser as they are essential for the working of basic functionalities of the website. We also use third-party cookies that help us analyze and understand how you use this website. These cookies will be stored in your browser only with your consent. You also have the option to opt-out of these cookies. But opting out of some of these cookies may affect your browsing experience.
Necessary Always Enabled
Necessary cookies are absolutely essential for the website to function properly. This category only includes cookies that ensures basic functionalities and security features of the website. These cookies do not store any personal information.
Non-necessary
Any cookies that may not be particularly necessary for the website to function and is used specifically to collect user personal data via analytics, ads, other embedded contents are termed as non-necessary cookies. It is mandatory to procure user consent prior to running these cookies on your website.
SAVE & ACCEPT